Why Can’t Target Win at Grocery? 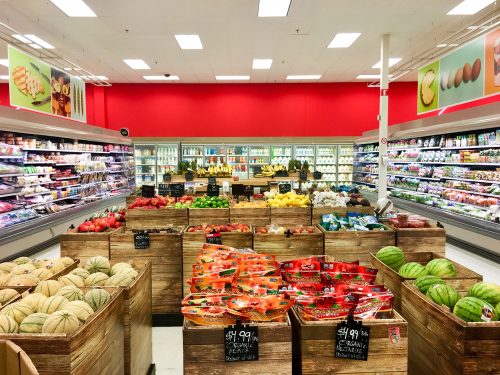 Target has spent years positioning their private label décor and clothing lines as being higher quality than their Big Box competitors, while remaining affordably priced. This special emphasis has landed Target a spot in the hearts of the middle class, thanks to this group’s demonstrated desire for quality knick-knacks, exclusive designer clothing collaborations, and trendy home goods that clock in at a lower price than, say, Pottery Barn.

There is one category, however, where Target has not always been a star: grocery. While “super” Targets have existed since 1995, it wasn’t until 2009 that all Targets were outfitted with a fresh section and given major renovation for grocery.

However, grocery sales have been somewhat sluggish, and only made up 22% of Target’s sales in 2018. This lackluster performance is in large part because Target groceries do not match the Target brand. The two factors that made Target a standout – quality and trendiness – are almost non-existent among their fresh and frozen grocery department. Currently, Target’s grocery section is a small to medium mix of national brands and their boxed private label brands, most notably Archer Farms, Market Pantry, and Simply Balanced.

As previously stated, Target crafted their brand image off of their reputation for good, quality home goods that appealed to middle class consumers. These consumers are in the store for these items, not the grocery section – they are not going to Target to get a good deal on avocados or doing weekly grocery shopping there. Rather, they’re there to pick up the exclusive Vineyard Vines collaboration or to browse their extensive collection of lamps. Target’s grocery pricing structure leaves little to be desired: they price higher than traditional grocers on some items, and though they run some specials, they are nowhere near the every day low pricing of Walmart.

You also won’t find family-size products or facings from newcomer brands in Target’s small grocery section, as they simply do not have the room. Walmart, meanwhile, has long been able to offer bulk groceries thanks to their warehouse-sized storefronts.

The grocery department at Target produces incredibly small baskets. After all, who wants to do their entire grocery run knowing they are overpaying on basic foodstuffs and when they don’t have a majority of items you may need? In addition, Target also loses out on not having a fresh prepared station of ready-to-eat food, bakery, or deli. Target consumers are not only missing out on price, but also product mix, volume, and variety.

Target should back away from trying to mimic a traditional offering and focus on what has always made them stand out: quality and trend. Target’s entire business philosophy rests on this sentiment, so why does their food not follow? Two stores that do follow Target’s philosophy are Trader Joe’s and Whole Foods. So why is Target trying to chase after the Kroger’s when they truly fit in more with these curated, upscale grocers?

Currently, there are 474 Trader Joe’s and 467 Whole Foods in the US. Target, meanwhile, has 1,844 locations in the US. Target especially has an advantage in areas with more economic diversity, and these factors combined present Target with two unique opportunities. First, they can establish themselves as the supplier of private label and organic before Trader Joe’s and Whole Foods ever come to town. Second, the rest of the store’s sales can support the location if the grocery sales are still weak, a convenience not afforded to Whole Foods or Trader Joe’s.

Instead of stocking national brands at average prices, Target should investigate sourcing natural, organic, and hard-to-find items. The targeted consumer is already in Target, so why not undercut the more-expensive Whole Foods on price? Due to their size, Target would be buying much more than Whole Foods and could offer steeper discounts on the same items. The local grocery stores and Walmart won’t be carrying these items, making the Target grocery section a destination for consumers. Again, this lines up with Target’s entire philosophy involving home goods: quality and trend. Target finally achieves being a low-price leader, just of a different product mix.

Target is faced with a choice: continue mimicking traditional grocers with half the space and none of the pricing specials, or adopt a disruptive model that was made for the exact kind of consumers that already shop at Target. The choice won’t come easy, but if Target wants to transform their grocery into a destination, rather than an afterthought, the blueprint exists; they just have to take advantage of it.