Specialty Milks are Flooding the Aisles

In mid-March, viewers of Live with Kelly and Ryan were given a sneak peak of what may very well be the next big thing to hit the supermarket dairy case – platypus milk.

Researchers have discovered that the milk of the Down Under egg-laying mammal contains bacteria-killing properties that may help humans ward off disease. Co-host Ryan Seacrest gamely drank a glass of what purportedly was platypus milk – he described it as tasting like Elmer’s Glue – and it did not go over well with his intestinal track; he was forced to seek out a Gas-X from a member of the studio audience.

So while all of the kinks may not have been worked out for platypus milk, if and when it does come to market, it is going to have a hard time find a space on already crowded dairy case shelves.

“Today, there are so many great options out there especially for people who have milk allergies, which I notice are more prevalent now,” says Roxana Ehsani, RD, LDN, and nutritionist at Giant Food’s O Street Market store in Washington, D.C. “Consumers can turn to almond, soy, walnut and hazelnut milks. I am even seeing flaxseed milk, so there are lots of great options for people to turn to if they have a milk allergy.” 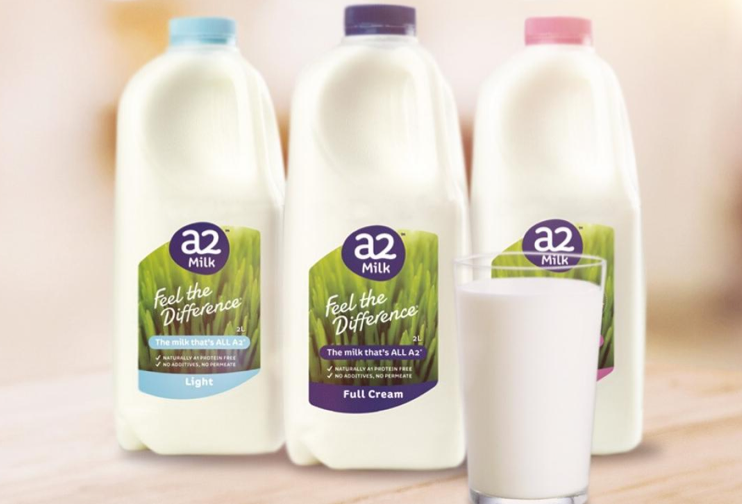 The latest entrant to the dairy case is a2 Milk – cow milk that only contains the A2 beta casein protein which has been shown to reduce acute gastrointestinal symptoms in some milk-sensitive consumers. Dairy cows produce A1 beta casein, A2 beta casein, or both A1 and A2 beta casein. A typical dairy will blend all of the milks together. Founded in New Zealand in 2000 by Dr. Corran McLachlan, the a2 Milk Company sells milk strictly from cows that produce only the A2 beta casein. It has had great success selling its products in Australia, New Zealand, China and the U.K.

A double-blind, randomized study conducted of 600 adult Han Chinese residents in China found that consumption of milk containing only A2 beta casein protein reduced acute gastrointestinal symptoms compared to drinking conventional milk containing both A1 and A2 beta caseins proteins in respondents with self-reported lactose intolerance. According to a2 Milk Company officials, this shows that the adverse gastrointestinal symptoms following the consumption of conventional milk may be related to the presence of the A1 casein protein, rather than lactose itself.

A2 Milk Company now has close to 10% of the total Australian fresh milk market, and has set its sights on the U.S., where it has established a U.S. headquarters in Boulder, Colo., and been named one of the Top 10 Most Innovative Companies in Food in 2018 by Fast Company magazine. Its products are currently sold in California, the Southeast, the Northeast and New England. Wegmans, ShopRite, Stop & Shop, Kroger, Whole Foods, Safeway and Publix are among the retailers carrying the line, which consists of whole milk, 2%, 1% and chocolate 2%.

One benefit to retailers is that the specialty milks offer higher retails and margins than traditional milk. a2 Milk retails for around $3.99 a half-gallon, for example, compared to about $1.99 for a half-gallon of store-brand whole milk. Likewise, soy and almond milks are in the $4.00 per half-gallon range, while organic cow milk brands, like Horizon, can be upwards of $5.00 per carton, depending on the retailer and geographic region.

Oregon Dairy, a one-unit supermarket in Lititz, Pa., the heart of Lancaster County’s Pennsylvania Dutch Country, is a unique operation that maintains a 500-head herd of dairy cattle and bottles its own milk, a proven draw for both locals and visitors. Still, even Oregon Dairy is not immune from the growing impact of alternative milks.

“Both the soy and almond milks have grown, and if anything, the almond milks have really picked up,” says Margie Pearl, Oregon Dairy’s dairy manager. “But we haven’t really had to cut back on the space devoted to our own milks. One trend we are seeing though is that the fat-frees aren’t selling as well as they used to sell. I think consumers are moving back to whole milk and the 2%. Our 2% has always done well,” she says.