Creative Titans: Walt Disney and the Dream That Began with a Mouse 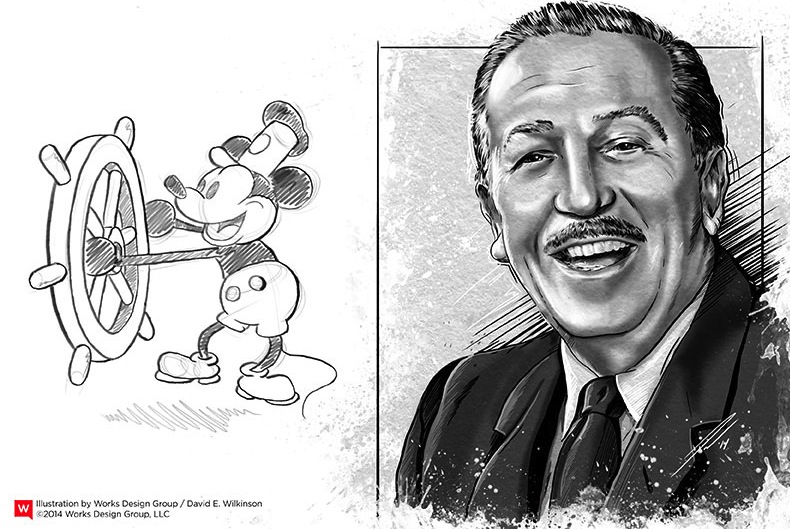 Walt Disney was a determined man who had a vision of a happier, brighter place for kids and adults alike. He was always a visionary and creative leader who loved to entertain people, and continued to do so for the remainder of his life.

In his professional life, Disney was renowned as an animator, film producer, and theme park designer.  We see him as being one of the great creative leaders in history (among many other things). Along with his team of highly skilled staff, he was able to create some of the most iconic fictional characters of our time, including Mickey Mouse (which was voiced by Walt Disney himself).

When he made plans to produce the first animated feature-length film, Snow White, the Disney Studio was not confident in the endeavor and referred to the project as “Disney’s Folly”. However, he stayed true to his lasting words, “If you can dream it, you can do it,” and stuck with the project. It became the most successful motion picture of its time and earned more than $8 million on its initial release. The film also ushered in the period known as “The Golden Age of Animation”.

Disneyland, also known as “The Happiest Place On Earth”, first opened in 1955. It offers a closer look into Disney and the characters he created. Disneyland and Walt Disney World Resorts can be found around the world, including in the United States, Tokyo, Paris, and Hong Kong.

The Disney empire continues to live on and grow without him, but certain elements will never change and he will be forever known as the man who changed the world through animation.

In creating an impeccable experience in his theme parks, Walt had a singular vision for the design and staging of the parks.  He and his design team (which he named Imagineers) implemented his vision with an incredible degree of craftsmanship.  Whats more, once he had an idea in his head, Walt stuck with it until it came to fruition. He was quoted as saying, “Get a good idea, and stay with it. Dog it, and work at it until it’s done, and done right.” There were many projects and ideas that Disney was confident in and saw through, even while his partners and staff were doubting him. He proved that taking chances is what life – and the world of design – is all about.